The WIR SYS1 from Williams Sound is a two-channel wireless listening system ideal for use in courtrooms.

This two-channel infrared system is the pro choice for courtrooms and other venues that require hearing assistance, language interpretation or private listening solutions. Features four-channel, selectable, body-pack receivers (can be recharged when used with BAT 026-2 AA NiMH rechargeable batteries and CHG 3512 multi-bay charger not included). This system ensures private and secure transmission to participants within the listening area. Power supplies, cables and rack mount included.

The MOD 232 modulator can accept two mic or line-level audio inputs simultaneously via the XLR/TRS combo input jacks. It uses a Baseband cable connection to transmit the audio over one of four selectable frequencies to the WIRTX9 emitter. The modulator also has RCA line outputs for connecting to monitors or recorders. Additional modulators may be daisy-chained as well.

The emitter receives the audio signals and divides its power equally among them. In the case of this system, two channels will be received and sent to a coverage area of approximately 18,000 square feet. If an additional modulator (sold separately) were connected, the emitter would receive four channels, and a coverage area of approximately 11,000 feet could be maintained. The emitter is wall or ceiling-mounted, and sends the audio from the modulator to the WIRRX12-4N receivers.

The receivers are compact bodypacks that are easily held or worn around the neck on a lanyard. They offer a four-way channel selector to match the frequency of the other system components, and a large, easy-to-use volume control. The standard 3.5mm headphone jack accepts the included fold-flat headphones as well as the included neckloop, which accommodates a user with a T-coil-equipped hearing aid. The receivers each operate for up to 60 hours on standard AA batteries.

Shop by Manufacturer
Shop by category
Get a Rental FREE Quote

FEATURED MANUFACTURERS
Brands You Can Trust 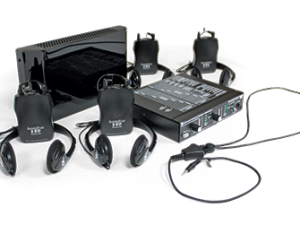 You're viewing: Williams AV 2-Channel Infrared Listening System for 4 Users (WIR SYS1) List Price: $3,230.00
Our Price: $2,822.00
Add to cart
We require the Secure Sockets Layer (SSL) protocol and Session Cookies to be enabled on your browser in order to take advantage of many special features, such as registration and ordering online, or you will not be able to place an order online. You should have at least a browser version of Microsoft Internet Explorer 4.0 or Netscape 4.7, or above. Click here for more information. OkPrivacy policy